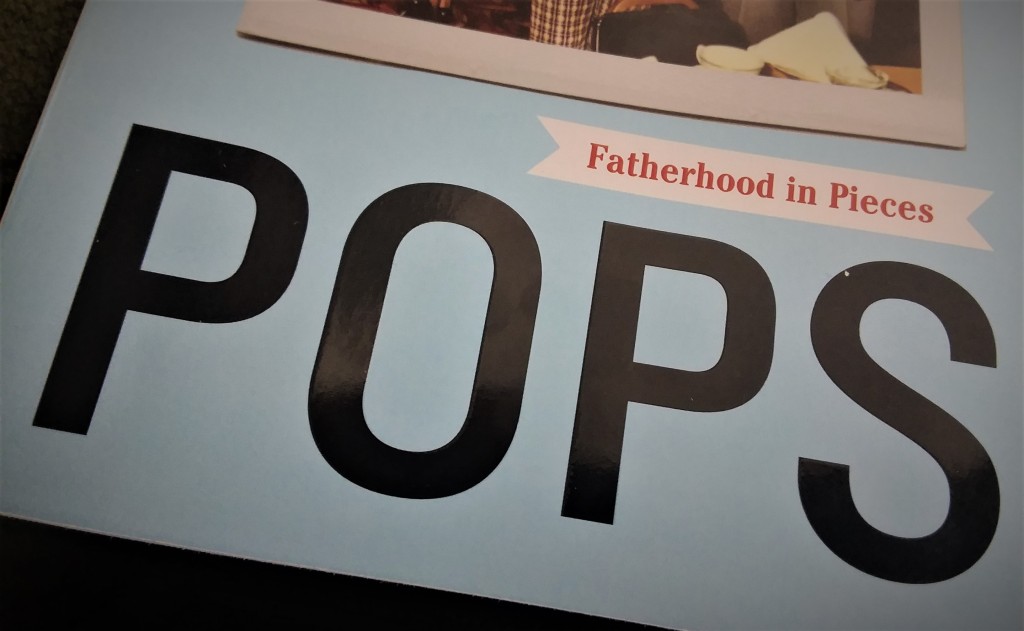 I am forever a father. A son too, though the earthly connections to my parents ended seven years ago. Still, I choose to embed the themes of both father and son dynamics in my writing. I believe those roles and identities are rich with possibilities and pitfalls. They remind us of our past, our present, our place in the world.

Knowing my thematic propensities, recently Tom gave me a thoughtful, funny book that explores both sides of the equation. I’ll confess Michael Chabon’s stories Pops: Fatherhood in Pieces captivated me from the start–chronicling the escapades with his style-conscious, adolescent son Abe on their Paris Men’s Fashion Week odyssey–until the end when we learn of Pops, the doctor, and the author’s observations of his dad. That left me in tears.

It reminded me of my own father, Walter. How he coaxed me to tag along in 1962 when he got his hair cut. I was his number one son. At least that’s the way he introduced me to waiting patrons at the cosmetology college. Each time we went I feared Walter would force me to agree to a buzz cut from a boisterous barber, who snapped his cape like a matador and plucked black combs from tall jars of blue disinfectant.

I went along with Dad’s scheme anyway. I cowered behind his high-waisted, pleated pants before he stepped up into a swiveling chair for a cheap trim, a quick shave, and a dose of baseball banter between square-headed men wearing starched white shirts and boxy black-framed glasses.

In reality, I was Walter’s only son–four-year-old Bosco. It was an endearment he bestowed upon me, because I painstakingly pumped and stirred chocolate syrup of the same name into tall glasses of cold milk. In exchange, I sat in awe of my gregarious father as he gulped his coffee and savored his soggy Shredded Wheat. We loved each other, our playfulness, and kitchen table excesses.

Though Walter has been gone for more than twenty six years, I was thinking of him as I finished reading Michael Chabon’s book last weekend. Then, in the same two-day period, along came a fresh chapter of my own fatherhood. Both of my sons, Kirk from Chicago and Nick from Tempe, came to support me on Saturday in my literary life at the 7th Annual Local Author book sale in Scottsdale.

Behind the scenes, they’ve been there since 2014 when I waved goodbye to corporate life. Rooting me on to explore this late-in-life literary fantasy that has become a reality. But Saturday was different.

I stood before Tom. First he took my photo in front of my table. Behind my three books. Later when Kirk and Nick arrived, I stood between my two adult sons. I remembered how far we’ve come since February 1992 … when my own fatherhood felt it had shattered in pieces … when their mother and I told them we were divorcing. I was moving into a new home. They would spend half of their lives with each of us.

Fortunately, in 1992 I had the gumption to stay in their lives and love them. We built a life together. Then Tom came along in 1996 and, over time, they learned to love him too. Together we stood by Kirk and Nick as they grew.

And then, suddenly on Saturday, they were standing by me.

I’ve figured out why our fire barrel cactus is leaning to one side. It’s more than the fact that it’s stretching south, craving the heat of the sun after a month of chilly mornings. It’s because when you live in tight quarters in a yellow ceramic pot in a condo community, you can’t help but overhear everything and find yourself either numb to it all or straining to hear more as the soundtrack of life passes by.

For instance, the start of a neighbor’s engine before he heads off to work. The breezy exchange between snowbirds as they march ahead for a morning walk to the canal. The rhythmic alternate drilling of a diligent woodpecker and construction worker digging two holes: one in a palm tree thirty feet up; the other fifty yards over the western wall. That’s where still another village of town homes will soon rise on the footprint of an evacuated auto dealership.

In other words, our sly fire barrel cactus is eavesdropping as we owners prattle on about another trip to the local gym. Grab our keys and water bottles (gotta stay hydrated in the desert). Fling the bags holding our laptops over our shoulders to feed our writing fetishes. Dash out the door and coo about the much-anticipated arrival of a kitschy book-themed tablecloth (just released from an Amazon box), designed to attract attention at the upcoming 7th Annual Local Author Book Sale.

Enough of this gibberish. Tom and I will be peddling books on Saturday, February 1 (10 a.m. to 2 p.m.) at the Civic Center Library in Scottsdale, Arizona, with about a hundred other writers and countless readers … while our cactus holds down the fort and listens for the drum of desert gossip.