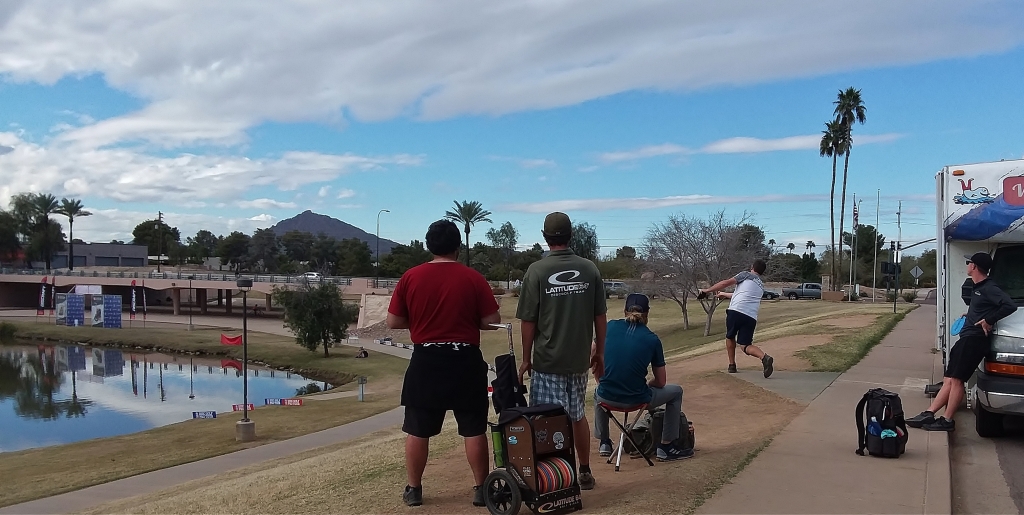 On Saturday, I watched Chandler let it fly. He’s a friend who’s in town participating in a Disc Golf Pro Tour event here in Arizona. Chandler is pursuing his passion. Doing everything he can to earn a living in a sport he loves. Competing in a profession in which he has quite a bit of skill.

I’ll admit it. I know little about the sport of disc golf. It appears to follow many of the rules of traditional golf. The primary difference is that you fling a round disc toward a basket, rather than drive a tiny ball with a club into a hole. The idea is to deposit the disc in the basket in as few attempts as possible.

Yesterday, on a warm and occasionally breezy Scottsdale afternoon, several of us (we dubbed ourselves Team Chandler) followed along in the gallery as the action wound its way from one end of Vista del Camino Park to another.

As with any golf competition, there were highs and lows. Birdies and bogeys. Fist bumps and sighs. But the good news is Chandler made the cut. He’s competing in the final round of the tournament today as I write this. His goal is to finish in the top ten.

No matter if he does or doesn’t, the important thing is Chandler is following his dream in the desert and pursuing his passion. Whatever the results are today, he will move on to the next stop on the tournament circuit in Texas this coming week.

After all, win or lose, life is short. It’s always better to let it fly.