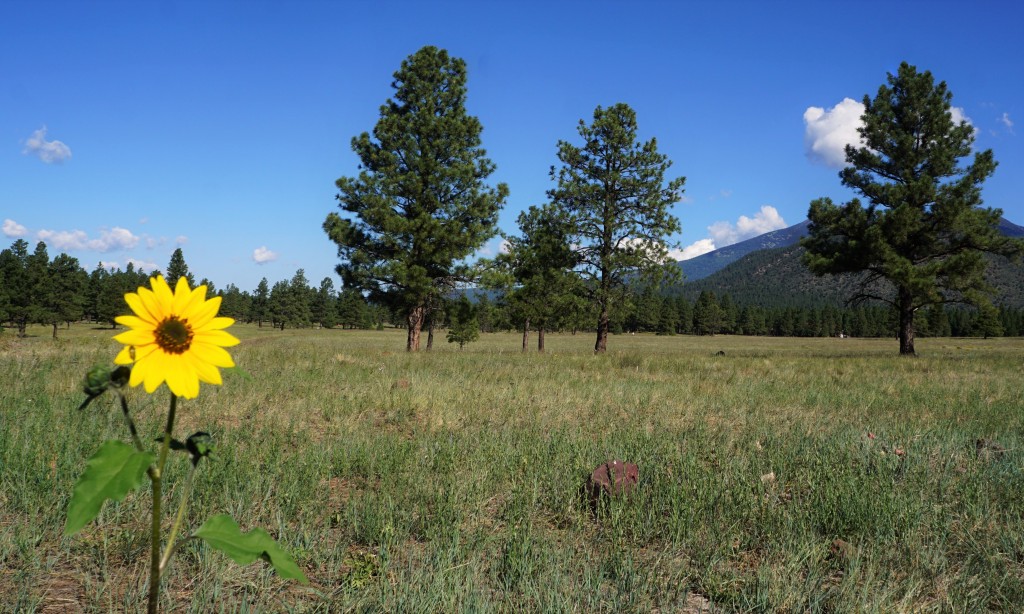 There you stood, rare and bright. Defying the odds. Shining in a field far away. Flourishing in a wide open world. Sparkling in the foreground of my dreams.

I still see you, sunny and true. Unfolding under the sky. Craning for a mountain view. Growing taller everyday. Promising petals on a path I might have missed.

For a few minutes last Sunday, I was up on the roof. No, I wasn’t cleaning the debris out of my gutters. My husband Tom and I, along with John and Sharon (two lifelong friends visiting from St. Louis), were on a two-day, Flagstaff sightseeing mission, seeking northern Arizona’s coolest and highest spots.

On a rare, seventy-degree-and-mostly-sunny afternoon, we boarded the Agassiz Chairlift (elevation 9,500 feet in the San Francisco Peaks) and rode above the tall pines another 2,000 feet to the top of the Arizona Snowbowl ski resort.

Of course, this excursion was just for summer thrills. There wasn’t any of the frozen white stuff in late July. In fact, if there had been snow, I would have been far away for two reasons:

#1 … Unlike our friends from St. Louis who learned to ski when they lived in Europe, I’m not a snow bunny. Though Tom and I are in good shape for guys in their sixties, neither of us has skied much. On a personal note, I don’t care to risk broken bones on slippery slopes. I’m not interested in more pain or tempting fate. I figure it’ll arrive soon enough without me paving the way for a new and expensive relationship with an orthopedic surgeon. Besides, I already have a cardiologist and wouldn’t want him to get jealous.

#2 … I’ve endured enough cold and snowy Chicago days and nights to last a lifetime. To be precise, thirty-seven winters back in the relative flatness of northeastern Illinois.  Think sub-zero temperatures and howling winds in December and January and repeated rounds of snow-blowing to clear your western-exposed driveway in February and you’ll have the right mental image.

In all seriousness, Tom and I enjoyed getting reacquainted with John and Sharon. It had been nearly five years since we’d seen them. And, naturally, both the chairlift ride and the mountain scenery in our home state were breathtaking.

Hmmm … now that I think about it, perhaps our Rocky Mountain experience and my choice of adjectives have more to do with the thinner air I felt pumping in and out of my lungs at a high altitude than the actual view.

Either way, you can be sure I followed the rules on this sign. I did no running on Sunday. Just some light walking and a little heavy breathing until it was time for us to board the chairlift for the return trip, descend the mountainside, and climb down from Arizona’s magnificent and majestic roof. 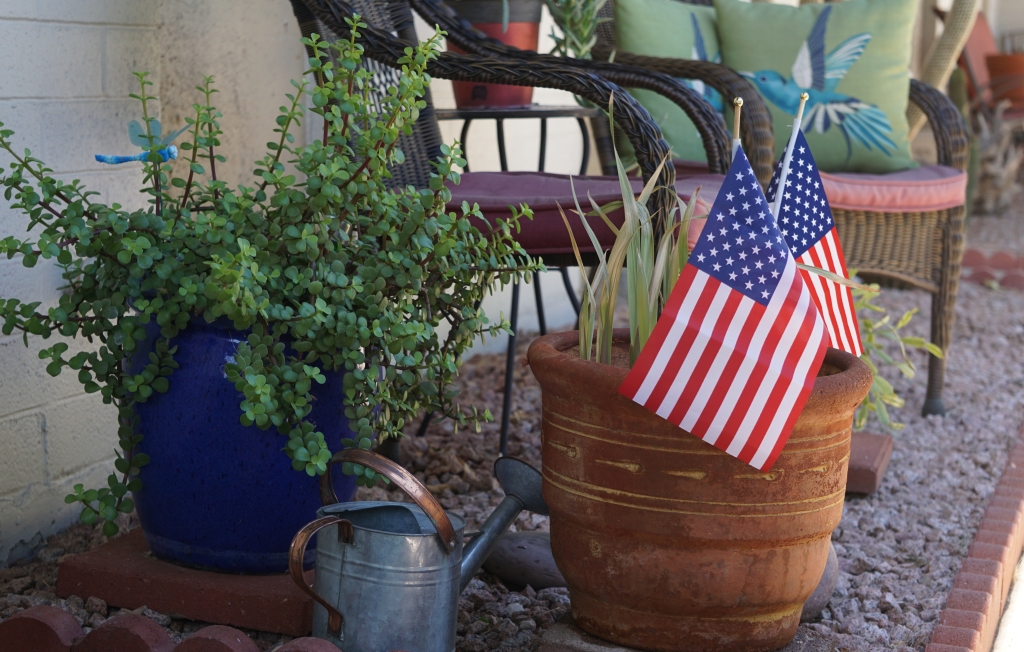 It was about 90 degrees at 7 o’clock when I grabbed my broad-brimmed hat, a tall bottle of water, and a cool, damp towel to cover the back of my neck. My husband and I were heading to Vista del Camino Park for our early morning walk before the temperatures escalated past 100. Such is life in July in Arizona’s Sonoran Desert.

The elephant foot succulents on the north side of our condo don’t seem to mind. They are coping just fine. Under the eaves. Resting in the shade most of the day. We decided to move our container of gladiolas next to them. They were getting torched on the south side in the all-day sun. Maybe the American flags will help boost their spirits as Independence Day approaches.

I’ve learned to accept and adapt to July’s torrid temperatures here … since that day nearly two years ago when I survived to tell the story of An Unobstructed View. As long as you keep a ready supply of water nearby and stay indoors during the spike in the afternoon heat, it’s manageable.

This year we’ve planned a few strategic July escapes, as well.  One to the stunning red rocks of Sedona a few hours north. Another further up Interstate 17 into the fragrant, tall pines and mountains of Flagstaff, where the air is thinner and the temperatures are twenty-five degrees cooler.

Truly, life in Arizona is a story of extremes … and remarkable beauty.