Late yesterday afternoon–a mid-April throwback Monday squeezed in before the Sonoran heat arrives in full force–I met John and Len, my full-time, sixty-something friends and part-time Polynesian Paradise neighbors, at the north edge of our community. We played horseshoes.

Two sandy, part-sun-part-shade horseshoe pits (spaced about fifty feet apart) have existed in our condo complex since the early 1960s. In 2021, residents and guests seldom use them. It’s more common for folks to walk by and not think twice about the horseshoe pits and their history on the way to their mailboxes.

That didn’t stop John, Len, and me from reclaiming the space and recapturing a practice that our fathers and grandfathers enjoyed more frequently in the twentieth century. The primitive, low-stress gaming experience was just my speed: slow, nostalgic and gentlemanly. It was a light-hearted, jovial hour of tossing, joking, clinking, clanking, and male bonding. (By the way, John won on Monday. He came from behind with a well-tossed ringer. Len and I will survive. We will live to throw horseshoes another day.)

Anyway, the activity rekindled a memory I wrote about and published in 2017 in a story titled They Pitch Horseshoes, Don’t They? from Tales of a Rollercoaster Operator, my book of Missouri recollections from the 1960s and 70s. It’s available on Amazon in paperback and Kindle.

What follows are excerpts. The setting? Babler State Park and the rolling rural countryside thirty miles west of St. Louis in October 1961. While the men were throwing horseshoes that day, I discovered a primitive-and-glassy nirvana: marbles.

Clink clank clink. Clink clank clink. It was the sound of metal on metal. The men in our family–Dad, Uncle Ralph and Uncle Harry–were hammering stakes into two sand pits about fifty feet apart. They sure do like to fling horseshoes, don’t they, I thought. Within minutes, they were tossing the U-shaped irons from one end to the other, hoping to catch the right angle and rack up a ringer …

On this particular occasion, while the women in our family unfurled the tablecloth and unpacked the meat for grilling, and the men settled into their game and passed cold bottles of Falstaff between throws, I wandered down a path to investigate the picnic area. That’s when I found a vacant campsite nearby and an abandoned plastic bag of multi-colored glass marbles wedged into a gap between the flat rocks of a stone bench.

In my visual memory, this was a To Kill a Mockingbird moment. You know, like when Jem and Scout found Boo Radley’s toys and trinkets buried in the trunk of a big ole tree. In hindsight, I suppose Boo had nothing to do with my glassy discovery. Another child had simply and accidentally lost his or her marbles. For some period of minutes, hours, days or weeks, these multi-faceted marbles were no one’s. They were lost in an unassigned gaming galaxy. But in the universe of fair play, it was Finders Keepers. This treasure was mine …

When I pulled Dad away from his pitching and showed him what I had found, his smiled doubled instantly. It felt like we had discovered a whole new language mined from an archeological dig … In a flash, Dad and my uncles suspended their horseshoe tossing, reverted to their childhoods, and surrounded me with explanations and names for the different marbles–many of them laced with swirls of colorful strands …

Marbles became my forever home of circular undisrupted creative possibilities. After our 1961 picnic was over and the sun began to set, we snuffed out the campfire, folded up the red gingham tablecloth, and packed away our picnic basket. I stepped up into the back seat of our Plymouth with my new marbles in tow.

Over the coming weeks and months, Dad pitched more horseshoes at the farm of Ed and Ollie Puetz near Gray Summit, Missouri, where we picnicked with family and friends and I watched the men drink another round of brews and play the game they loved.

Meanwhile, I added marbles to my glassy collection: aggies (made of agate) swirling with various ribbon patterns inside, tigers (clear with orange-yellow stripes), opaques (milky green, blue, and gray marbles) and cat’s eyes (they look like what they sound like).

All of my marbles became a creative extension of me. I played my instant-game-in-a-bag any time and any place–mostly at home on our basement floor on ordinary rainy days after kindergarten. All I had to do was obey one rule: “Mark, don’t leave your marbles in the middle of the floor.”

Stories of war, like global pandemics, aren’t only about those fighting on the front lines. There are the lovers, the brothers, the sisters, who worry and wait. They wonder about the worst and hope for the best.

World War II was winding down, while Walter’s older sister Thelma waited five long weeks in eastern Missouri for his next words. She didn’t receive his May 16, 1945 letter and photo of him linking arms with a somber Czechoslovakian girl until Friday, June 22.

Evidently, the Army bundled it with two others he wrote on June 10 and 12. The U.S. military transported all three across the Atlantic Ocean with a sea of other correspondence from service men and women stationed in Europe.

In 1945, Thelma was a single-and-sentimental-thirty-six-year-old secretary. By day, she worked at a branch of the Kroger Grocery & Baking Company in St. Louis. After completing her shift, she boarded the streetcar to 4218 Labadie Avenue on the north side of town. That’s where she lived in a modest, two-story, rented home with Louise and Albert Johnson, her mother and father.

My aunt was a gardening guru. A real rose and ballroom lover. Later, in the 1960’s when she and her husband Ralph owned a suburban St. Louis home, it was her ritual to lead us on a parade through her backyard to admire her flowers.

Through that gardening lens, I can imagine her coming home from Kroger on Friday, June 22, 1945, kicking off her shoes, flipping through the mail, and eagerly opening Walter’s letters while waltzing through her parents’ postage-stamp-size Victory Garden. That summer it might have been brimming with vegetables and herbs (perhaps even a few ruby-red roses) designed to supplement food rations and boost morale.

No matter how close or far my fantasy is from reality, I have in my possession proof that Thelma penned a rosy response to her brother later that night in an attempt to bolster his sagging spirit.

Here’s an excerpt of that letter, dated June 22, 1945 and postmarked June 26, 1945. She sent it via air mail from Chicago, Illinois. Incidentally, the Drake Hotel Thelma refers to, just east of North Michigan Avenue on Chicago’s Gold Coast, still operates today. It’s a few blocks south of Oak Street Beach, where Thelma and Vi likely tanned themselves that weekend on the shore of Lake Michigan.

Your fine letters of June 10 and 12 arrived today and found us happy and anxious for word from you. Also, we received today those wonderful pictures taken by you in Czechoslovakia. They are really “super” Wal and that little girl is a doll. Vi was here for supper and she too was pleased and happy by seeing you again … if only in a photograph. You look thinner, Wal–but as Vi said–he’s regained his figure and looks wonderfully handsome, younger, and really on the beam. We surely are proud of our dearest Walter boy, and justly so. I have the negative you sent in a recent letter and shall have it developed too … it looks like another Czech girl, right? …

Well Wal, Vi and I leave in the a.m. for Chicago and since the weather has taken a change for the good … we hope to have nice sunshine and a chance to get a tan on the beach and am sure we’ll find the “Drake” the finest hotel in Chicago as it’s accessible to everything …

I am enclosing some snapshots taken on Mother’s Day, Wal, and with them comes all our love to you, our dearest and most missed member. I hope you get to be around Paris for a while … so you can take it all in … and I’m hoping too you’ll be assigned to occupation forces even though it would delay our meeting it would ensure its being permanent when it did come …

With all the love of your loving but lonesome family and many thanks for the fine pictures (and I hope there’ll be more later–I can send film so just ask Wal and its yours) until a little later then its ever and always.

I’m not sure if Walter, my father, ever made it to Paris that summer. But when Thelma wrote her letter six weeks after V-E Day, there was the frightening possibility he would be shipped east to help fight the war still raging in the Pacific Theatre.

Instead, he returned to the United States on the U.S.S. Monticello in July 1945, carrying his dog tags, nightmares, a foot locker filled with possessions, and a fistful of family love letters. Dad received his honorable discharge from the U.S. Army on October 11, 1945.

This is one of the photos Thelma enclosed with her June 22, 1945 message. Thelma–the ever-exuberant, flower enthusiast–is on the right, smiling behind her corsage. Violet, my father’s twin sister, is on the left. On the back, Thelma wrote: 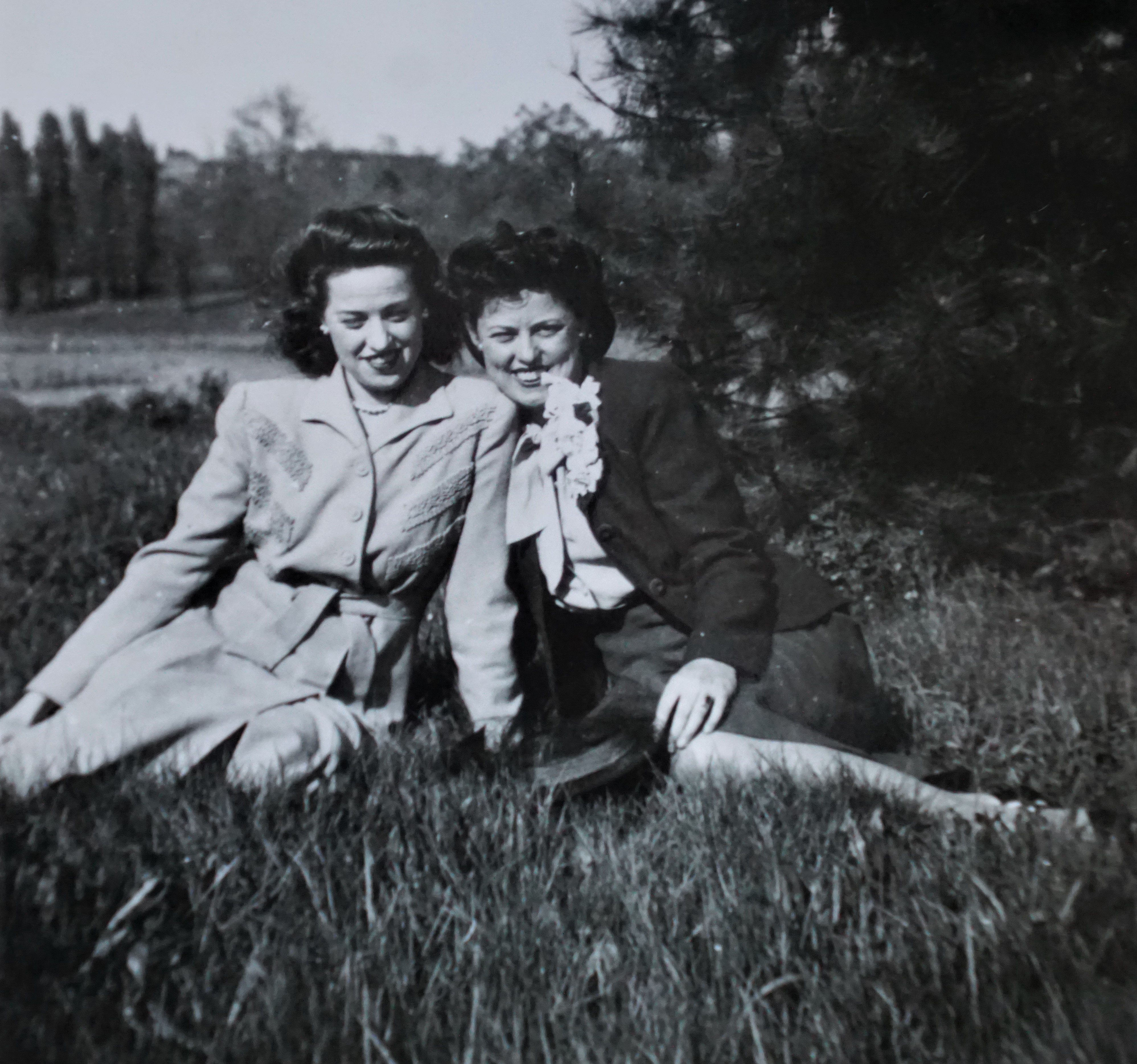 Sometimes, long after a chapter is written, lived or buried, you unearth a grainy photo and analyze it more closely. It prompts you to consider what you suspect, but will never really know. That the truth of war, like global pandemics, is often too painful for the traumatized to reconcile, resolve and recount.

Who was the Czechoslovakian girl posing in May 1945 with my father Walter A. Johnson, a sergeant in the 23rd Infantry Regiment, 2nd Division? What became of her in those days after Nazi Germany surrendered? What happened to her parents? Did she have siblings? Were they split apart by the war? Did they ever reconnect? Did she have nightmares about death and destruction like the ones my sensitive father carried back with him from Europe?

I’ve fabricated my own scenario about the photo and Dad’s handwritten message on the flip side. Maybe Walter simply wanted to share a harmless, tender image of his war experience with his parents, Albert and Louise, and his older sister Thelma … without acknowledging the bloodshed.

Perhaps he needed to pretend that everything in his world was all right even if it wasn’t. To imagine that in the madness of war he had been able to put his arm around and comfort at least one lost soul in the land he would leave behind. Even if it wasn’t his own.

One of Walter’s old army buddies–Corporal A. W. Donahue from Holyoke, Massachusetts–apparently knew him well. He wrote this in Dad’s pocket-size My Life in the Service book:

“The best-natured and biggest-hearted guy I’ve met in the Army is my old pal, Walt Johnson.”

Though I’ll never really know what happened seventy-five years ago in Europe, I am fortunate to read and hold this record of my father’s true nature, along with a short stack of family letters written and mailed from St. Louis and Chicago in 1945. The handwritten and typed sentiments would help keep his spirits afloat, when he thought he might be destined for another round of duty in the Pacific. Fortunately, for him and me, that never happened.

In the coming days, I’ll be sharing excerpts of at least one of the letters he received from Thelma. It was just like him to tuck them in his foot locker and bring them all home.