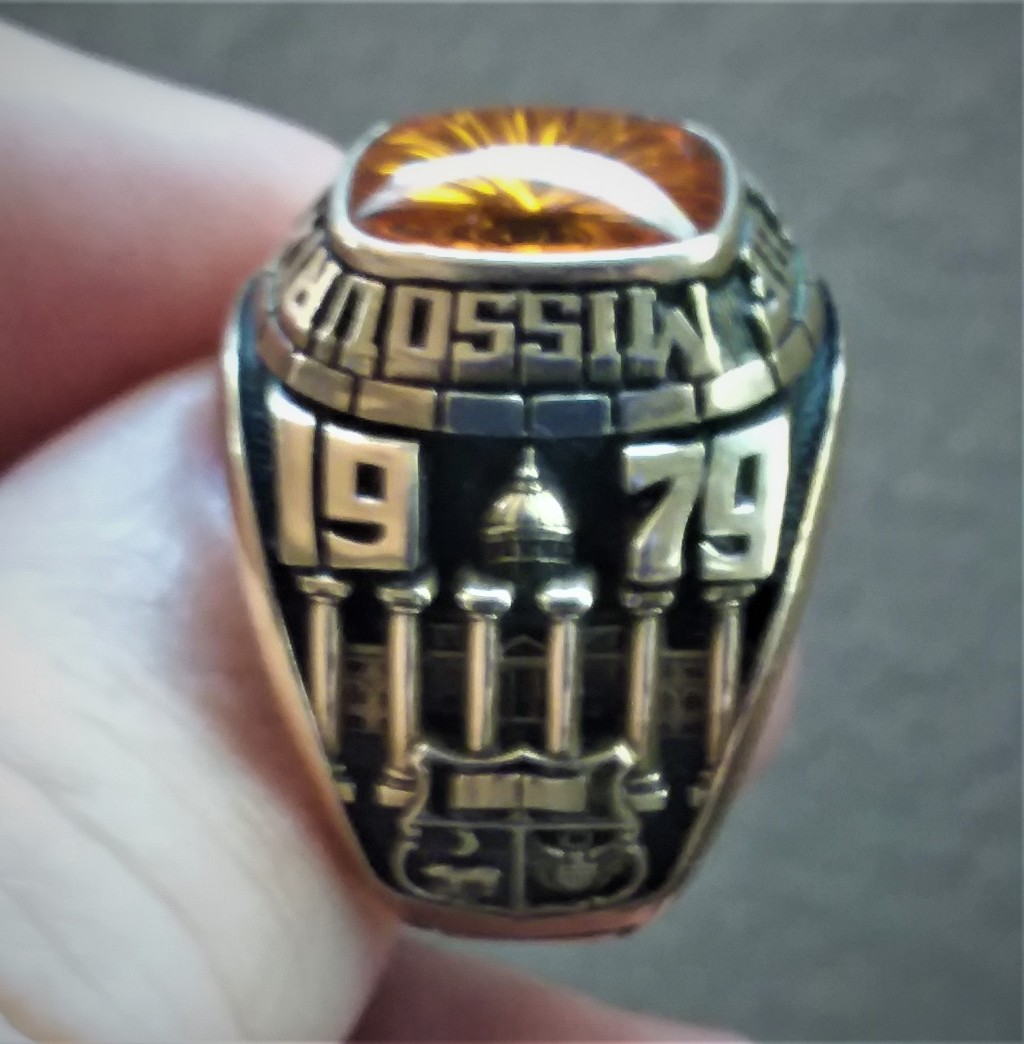 Our best memories–the ones cast in precious metals and inscribed with our names in cursive–far outweigh the cubic zirconium rings and balled up aluminum foil we choose to discard. But even the brightest ballast-laden snippets blur at the edges as they flash through our mind’s eye. They provide the weight we press against, cling to, or push away from.

My fourteen-karat gold college ring symbolizes the continuity of my University of Missouri years in Columbia. Resting in a dish with assorted jewelry in my bureau drawer, it features the school’s six iconic time-tested columns. All that remains of the university’s Academic Hall, which burned in a fire in the fresh snow of January 1892.

Out of the ashes, President Richard H. Jesse had the vision and fortitude to guide the school and transform it into a research-based institution. During his seventeen-year administration, the modern university Jesse envisioned was born. It grew and produced positive ripples around the ever-enduring stone columns … as well as generations who met near, lounged under or studied beneath them.

MU students have built lives and careers there. Succeeded and failed in times of war and peace. In the 1970’s, dozens of us tossed our Frisbees around the stone pillars … galloping across the Francis Quadrangle grass, running amok in the “Show Me” state until the next keg of beer or slice of Shakespeare’s pizza captured our attention. In my case, I walked across an outdoor stage to accept my Bachelor of Journalism degree in May 1979.

At their essence, the columns represent more than a social backdrop for play and frivolity. They are larger-than-life markers of time and civilization, before automobiles, airplanes, computers or digital technology. Poetic and historic reminders of their permanence and significance under fire versus our relative impermanence and insignificance.

I no longer wear the ring, but I’ve kept it nonetheless. When I pick it up and examine the luster and sparkle of the tiger’s eye, I marvel at what I accomplished, recall what I survived, and “retreat to the chambers that I left behind”, a lyrical line from folk rocker Dan Fogelberg’s song Heart Hotels and his 1979 album Phoenix.

In the late 1970’s, as I turned up the volume on my stereo and escaped into Fogelberg’s melancholy music behind my long hair, I didn’t imagine I’d go west one day and create a whole new life near the base of another rock formation … the Papapo Park buttes; a natural one … but that’s what can happen over the course of a lifetime.

More than forty years later, I’ve discovered a longer view, which comes only with lengthening late-afternoon shadows and survival. Whenever I imagine my life on an eighty-year, bell-shaped curve (we should all feel lucky to live that long … Dan Fogelberg died in 2007 at age fifty-six), I see the columns as the launching pad after the first twenty years.

The geological formation of the Papago Park buttes, just steps from my Arizona condo and millions of years ago at the bottom of a vast ocean, are likely the landing pad on the down slope of life for my last twenty.

Global pandemic or not, none of us knows when the end point will arrive. What the circumstances will be. We might as well enjoy the flights of fancy–keep throwing and catching our Frisbee in our sixties as Tom and I do–and take comfort in the anchors of life. The symbols of strength around us. The columns and buttes that keep us grateful and grounded in good times and bad.

6 thoughts on “The Columns and Buttes”